Code of ethics in the world of diamonds

Maison Vernain SA is committed to complying with the rules in force introduced by the UN or other regulatory bodies.

The business is committed to working in accordance with all the treaties that exist on diamond trading.

In 2003, Maison Vernain signed the Kimberley Treaty at national level, and in May 2006, it undertook to commit to a code of ethics within the Federation of the Swiss Jewellery and Watch Industries.

"Ethics are a priority for our company and we strive to constantly renew our ethical standards in order to deal exclusively with gems and stones whose origins we are certain of. To remain fully transparent towards our customers, our suppliers and ourselves control the natural diamonds in order to exclude synthetics diamonds, HPHT or CVD".

The Kimberley process is an international certification requirement for rough diamonds, which brings together governments and diamond industrialists with the objective of preventing negotiation on the world market with regard to the purchase of diamonds presented by rebel movements aiming to finance their military activities.

This agreement is the result of dialogues which started in May 2000 in Kimberley, South Africa.

It was signed on the 1st of January 2003 by Canada, the United States, the countries of the European Union, and since 2012, this process encompasses 54 members representing 74 countries.

This international cooperation is motivated by the problem of conflict diamonds as well as the trafficking of human beings and children. 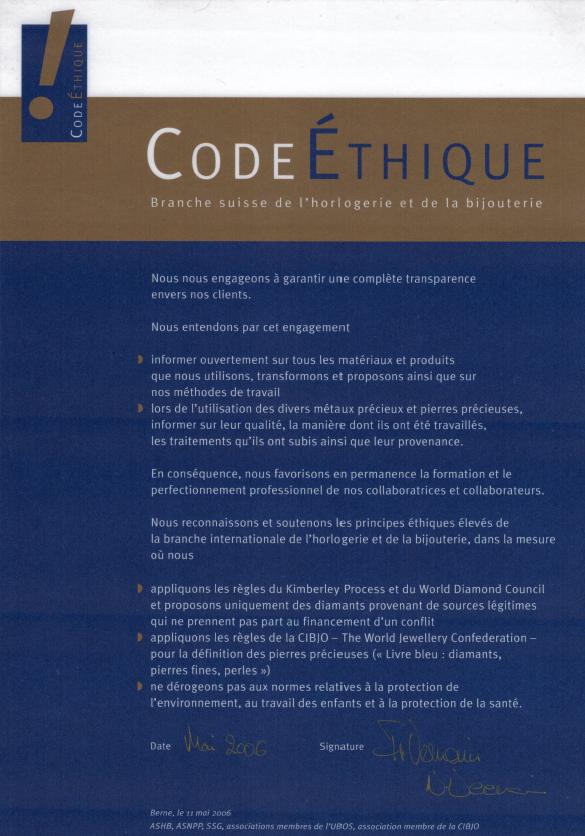