Diamond is a mineral composed of carbon crystal. It is the hardest natural material in the world (Mohs hardness of 10). Diamonds were formed from 1 to 3.3 billion years ago below the earth's crust, at pressure conditions of 4.5 to 6 gigapascal and extreme temperatures of between 1100 and 1400 degrees celsius.

Diamonds are brought to the earth's surface by very violent volcanic eruptions that leave no time for the diamonds to be transformed. Hence they are found in inclusions in unearthed volcanic rock called kimberlite or blue ground.

The first diamonds were extracted through alluvial mining 3000 years ago in the Pennar, Godavari and Mahanadi Rivers in the mythical region of Golcondia in India (a name which is still attributed to a certain type of diamond with particular contrasting brilliance).

Its natural forms, hardness and transparency obtained by partial polishing made it sufficiently attractive to settle it in jewellery for the first time towards the 2nd century.

Diamond facet cutting with diamond powder grinder did not appear until around the 14th century. Worldwide diamond trading developed once the route to India was opened up.

Diamonds are highly esteemed in India and Tibet and adorn sacred objects representing "fruit" of the stars, or originate from sacred sources symbolising eternal truth.

In the Middle Ages and during the Renaissance, diamonds were set in the top of crowns or worn as pendants, solely for kings and maharajas. They symbolised the 3rd eye.

Then Indian deposits were depleted, and from 1725 it was Brazil that offered its first discoveries, supplying the Western market right to the end of the 19th century, the time of the discovery of the South African deposits.

Currently, Russia supplies around 20% of the rough diamonds, followed by Botswana with around 19%, then Australia with 18%, the Democratic Republic of the Congo 16 %, South Africa 9%, Canada 7%, Angola 6%, Namibia 1%, China and Ghana 1%.

Around 200 tons of rocks have to be treated in order to find one carat of rough diamond. The rough diamond is sawn or cleaved, then bruted, cut and polished. Cutting is usually carried out in India, China, Israel, Antwerp or South Africa. 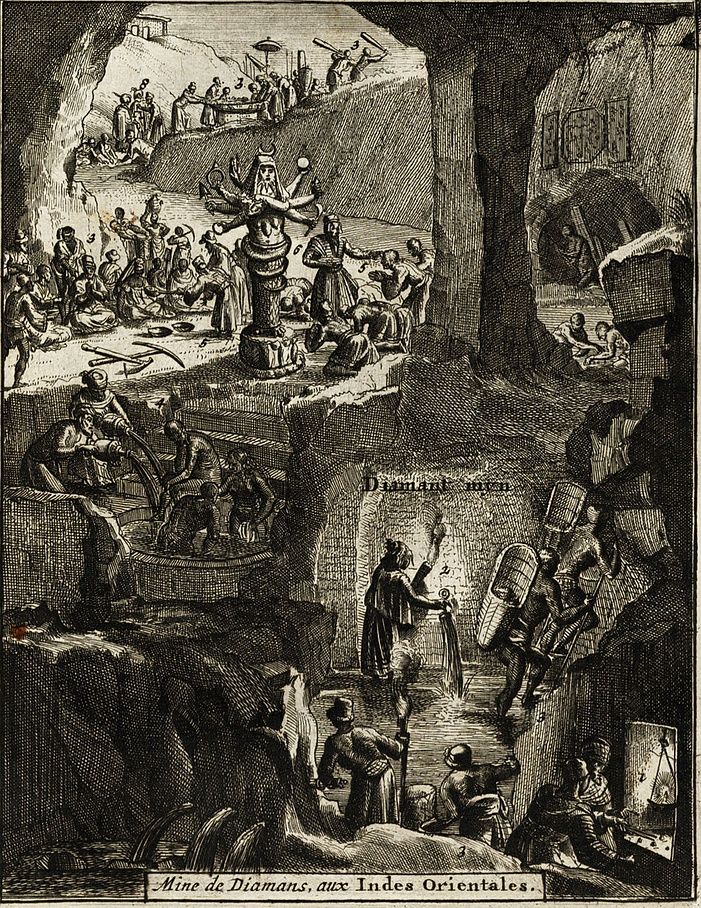